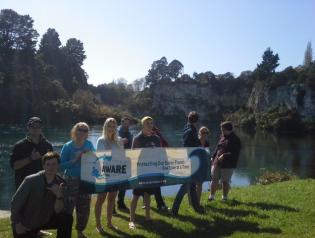 So, we have just completed our Dive Against Debris in the upper reaches of the Waikato River between Cheery Island and Reids Farm in Taupo. This has to be one of the most beautiful areas of New Zealand with the town wrapped around  the northern part of the spectacular Lake Taupo and the snow covered mountains creating a great backdrop at the southern end.

We had an enthusiastic group of divers who had driven down from Auckland (3.5 hrs – talk about dedication!!) to be a part of the dive. All of them were experienced divers who have a real affinity with the underwater environment. Every time I go diving with any of them I will see them picking up any small rubbish they find to bin once we are on land.

After a detailed briefing – and after snorkeling the route first so the divers were familiar with the swift flow of the river – we kitted up and entered with our buddies. I had set the limit at no more than 3 kilos per diver as we could not return to shore to drop off rubbish as we went and instead had to carry everything in catchbags until we reached the exit point. It was good to see that the river bed was fairly clean. For a site only a minute from the centre of town I was expecting worse.

The dive went off without a hitch with many smaller items brought up such as glass bottles, old bags, golf balls, road cones,  tins and a few batteries. A few of the larger items were hubcaps and bike tyres and the most unusual items were an electric razor and some fairly risque lingerie (?!), and for the fifth time doing this dive a GoPro was found beneath the Taupo Bungy site – still working!

A few of the things we saw but were too heavy to bring up were a mountain bike, what looked like a car engine and a shopping trolley. Its a shame to see these items but over quite a long stretch of river I was pleased to see there wasn’t more.

The dive took a total of around 50 minutes as a few of the divers decided to stop at some natural hot springs half way town to reheat themselves after the chilly 13 degree celcius water.

All in all this was a great day with around 30kg of rubbish recovered and a lot of happy divers. If anyone ever wants to dive a beautiful and unque area of New Zealand I strongly recommend Lake Taupo and the Waikato River from Cherry Island to Reids Farm.