Sting Rays & Eagle Rays are some of the more common creatures we see on our local dives. There is also a common cause of confusion when determining the differences between the two. It is not uncommon for divers and swimmers alike to have an undeserved fear of these amazing rays. 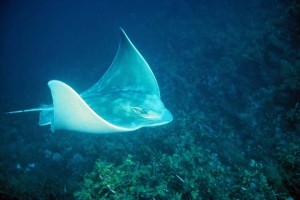 Both Stingrays and Eagle Rays behave similarly, they both lie on the seafloor often covered in sand, but the easiest difference between the two when observing, is the way they scale through the water. If you see a flap of their wings similar to a bird, you are seeing an eagle ray. If they ripple through the water like a pancake; it’s a stingray.

A common misconception is the danger of these rays. Often I have students terrified of getting anywhere near either of the two, when in reality, these rays are often friendly, curious and fascinating to observe. There is almost no danger in observing these rays however there are a couple of signs they are becoming agitated or scared, if you see their barb raise or their wings raise up. This is your sign to give them some more space. After retreating a little you will find they return to their hidden pose for you to observe them further.

Sting rays have a fascinating life. In New Zealand we are very lucky to have a congregation of both long tall and short tail stingrays at the Poor Knights Marine Reserve in the summers. These rays often pass through the underwater arches at the knights in the hundreds. This phenomenon (referred to as ‘stacking’) is observable by recreational divers and is a bucket list dive I would highly recommend.

Next time you spot one diving, rather than heading the opposite direction, take some time to appreciate and observe the rays. They might even be the highlight of your dive.